I Found A Baby Bird

Definition: a bird hatched in an undeveloped state and requiring care and feeding by the parents, such as songbird and raptor species. An altricial baby bird will go through three developmental stages before being able to fly and become independent.

Hatchlings and nestlings found on the ground can be placed back into the original nest. If the original nest has fallen or been destroyed, a new nest can be made from a small container with holes in the bottom filled with natural materials. This container should be tied near the location of the original nest so parents are able to locate the young. Monitor from afar for several hours to confirm that the parent(s) have found the new nest and have resumed care. If you are unable to find a nest, the nest cannot be reached, you are unable to create a new nest, or the bird appears to be injured, call NWC at (715) 356-7400 for further advice.

Finding fledgling birds on the ground is completely normal. The bird has naturally left the nest to learn to fly. It often takes a few days before the fledgling is able to master its flight, remaining on the ground during that time. If you are concerned for the fledgling, it can be monitored from afar for several hours to determine if the parent(s) return to care for the fledgling, which they often do. If you do not see a parent returning to care, the fledgling is in found in an unsafe environment, or it appears injured, contact NWC at (715) 356-7400 for further advice.

Definition: a bird hatched  in an advanced state and able to feed itself almost immediately, such as waterfowl and game bird species. 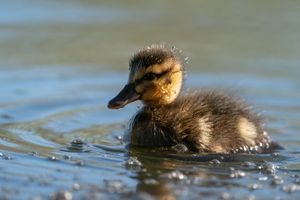 If you find a baby bird on its own and vocalizing without a reply, monitor it from afar for an hour to see if the parent(s) returns.

If you find a baby bird in a situation not described above or are unsure how to handle, please contact NWC at (715) 356-7400 for further assistance.

This form needs Javascript to display, which your browser doesn't support. Sign up here instead
Close